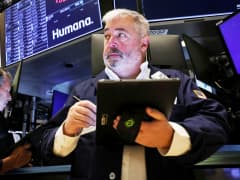 Dow Jones Industrial Average futures were unchanged. On Monday, the 30-stock index closed above its 200-day moving average for the first time since late April. S&P 500 and Nasdaq 100 futures dipped 0.15% and 0.21%, respectively.

Shares of ZipRecruiter slipped more than 5% in after-hours trading when the company lowered its revenue outlook. Shares of Compass shed nearly 13% after the real estate broker missed expectations on quarterly revenue and cut its outlook.

At the start of the regular tradingon Monday, energy and financials initially dragged markets down following weak economic reports from China and news that the country’s central bank had unexpectedly cut interest rates. Later in the day, markets rebounded and went positive when consumer staples, communication services and consumer discretionary stocks rallied.

Still, some see the recent gains as a bear market rally instead of the start of a new bull cycle.

“I think people are not being sensitive enough to this economic slowdown and what it’s going to mean for corporate earnings and profit margins,” Peter Boockvar, chief investment officer at Bleakley Advisory Group, said on CNBC’s “Fast Money.”

Investors have more earnings releases to look forward to in the coming week as major retailers are set to report. Home Depot and Walmart are slated to post results before the bell on Tuesday. Target and Lowe’s will report quarterly results Wednesday.

This week, investors will also be watching for the minutes from the Federal Reserve’s July meeting, which could give further clues as to how the central bank will hike rates to tame inflation going forward.