Stock futures were muted early Wednesday after a rally on Wall Street as investors bought the dip following a five-day sell-off in the S&P 500.

Futures on the Dow Jones Industrial Average inched up 45 points, or 0.12%. S&P 500 futures and Nasdaq 100 futures were little changed.

The overnight session followed a rebound in the market with the tech-heavy Nasdaq Composite gaining more than 1% for a second straight day of gains. The S&P 500 rose 0.9% on Tuesday, snapping a five-day slide, while the blue-chip Dow added 180 points.

“The anxiety relating to the Fed’s recent hawkish tilt and the outlook for higher rates seems to have calmed a tad (at least for now), leaving investors fishing for opportunities in pockets that saw the deepest cuts in recent weeks,” Chris Hussey, a managing director at Goldman Sachs said in a note.

Technology shares have suffered a steep sell-off in the new year after the Federal Reserve signaled a faster-than-expected tightening schedule. Many bet that the market could see the first interest-rate hike as soon as March.

Bond yields, which spiked to start 2022, stabilized on Tuesday with the10-year Treasury yield slipping to 1.76% after topping the 1.8% level earlier in the week.

Investors are awaiting Wednesday’s key inflation data to assess the economic picture and the Fed’s next move.

“I’m not sure the inflation data tomorrow is going to put investors’ minds at ease, with CPI seen hitting a multi-decade high above 7%,” said Craig Erlam, senior market analyst at Oanda. “A higher reading could spook investors once again just as equity markets appear to be stabilizing.”

Fed Chairman Jerome Powell said on Tuesday that the economy is both healthy enough and in need of tighter monetary policy, which likely will entail rate hikes, tapering of asset purchases and a smaller balance sheet.

Meanwhile, big banks will kick off the fourth-quarter earnings season on Friday. JPMorgan Chase, Citigroup and Wells Fargo are slated to release quarterly results before the bell. 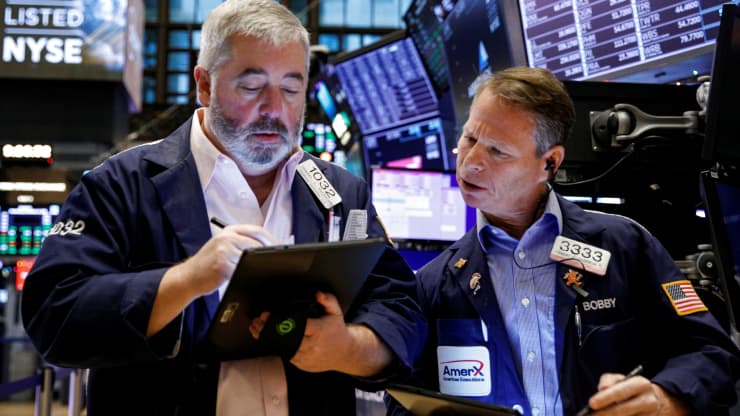