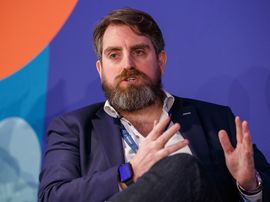 Crypto exchange Krakenhired a new managing director for its UK operations from one of its closest rivals.

Blair Halliday, previously UK managing director for the Winklevoss twins’ exchange Gemini, is taking over the same role at Kraken, according to a statement published Friday. Halliday will replace Curtis Ting, who has been appointed global senior managing director, covering multiple jurisdictions.

Halliday, who had been with Gemini since 2020, will oversee Kraken’s “commercial, regulatory and political relationships in the UK,” as well as its 350-strong employee base, the statement said. He will be replaced at Gemini by Stephanie Ramezan, formerly the exchange’s director of business development, according to a spokesperson for the firm.

The changes add to a growing list of top crypto executives who have exited or shifted their roles, marking a changing of the guard as crypto weathers a downturn in prices and demand. Kraken’s CEO Jesse Powell stepped away from his position last month, and is now serving as the exchange’s executive chairman.