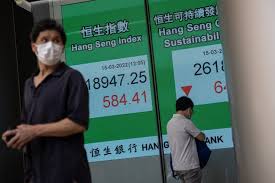 The Hang Seng index in Hong Kong fell 0.72%, and the Hang Seng Tech index lost around 2%.

The Financial Times reported over the weekend that China plans to sort U.S.-listed Chinese companies into three groups depending on the sensitivity of the data the firms hold.

The new system aims to prevent American regulators from delisting Chinese companies by bringing some firms into compliance with the U.S. rules, the FT reported, citing people with knowledge of the situation. Chinese firms with “secretive” data would have to delist, the report said.

With the focus on the US FOMC meeting, Asian assets will likely trade mixed in the early part of the week with stagflation risks staying top-of-mind.

MSCI’s broadest index of Asia-Pacific shares outside of Japan was down 0.44%.

Inflation data in Singapore is set to be released Monday. Economists polled by Reuters expect the core consumer price index for June to increase 4.2% compared to a year ago. Prices rose 3.6% in May.

Earnings playbook: The investing game plan as Apple and Alphabet lead the busiest week of the season

Over the weekend, the World Health Organization declared monkeypox a global health emergency. The organization’s emergency committee was unable to reach a consensus, but WHO chief Tedros Adhanom Ghebreyesus made the decision to issue the highest alert, though he said it is unlikely to disrupt global trade or travel at the moment.

Later this week, all eyes will be on the Fed rate decision and the release of second quarter gross domestic product data in the U.S.

Expectations for a 75 basis point move in July stood at 78.7%, according to the CME Group’s FedWatch Tool.

“With the focus on the US FOMC meeting, Asian assets will likely trade mixed in the early part of the week with stagflation risks staying top-of-mind,” Venkateswaran Lavanya, an economist at Mizuho Bank, wrote in a note Monday.

Within the Asia-Pacific region, advance estimates for South Korea’s GDP will be out Tuesday and Australia reports inflation data Wednesday.

The U.S. dollar index, which tracks the greenback against a basket of its peers, was at 106.662.