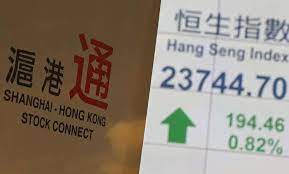 Mainland Chinese markets also rose, as the Shanghai composite was up 0.37%, and the Shenzhen component rose 0.61%.

In Australia, the ASX 200 was higher by 0.69%. Gold miners gained in the morning. Kingsgate Consolidated soared more than 10%, while Evolution Mining jumped 4%, and Newcrest was up 3.22%. Gold prices climbed 1% on Tuesday.

Economic numbers due out in Asia on Wednesday include China’s consumer and producer price index for December.

“Lower inflation opens room for the government to loosen monetary policies further. The probability of interest rate cut is rising, in our view,” Zhiwei Zhang, chief economist at Pinpoint Asset Management, wrote in a note after the release of China’s inflation data.

These stocks are best poised to beat expectations this earnings season, Bank of America says

Stocks on Wall Street rallied for a second day after a rocky start to the year.

Fed Chair Jerome Powell said Tuesday that rate hikes and tighter policy will be needed to control inflation, but did not announce an accelerated change in policy from what the central bank had already signaled.

The U.S. dollar index, which tracks the greenback against a basket of its peers, was at 95.601, falling from levels above 95.9 earlier in the week.