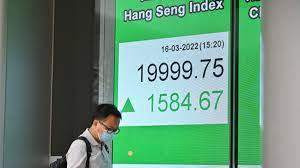 Hong Kong’s Hang Seng index led gains among the region’s major markets, surging 5.02% in morning trade and erasing heavy losses from earlier in the week. The benchmark index saw its best day since October 2008 on Wednesday as it rocketed 9%.

Chinese real estate stocks in Hong Kong also saw big gains, with Country Garden up 18.71%, Sunac soaring 39.44% and China Evergrande Group popping 13.95%. The Hang Seng Properties index traded 6.78% higher. Those gains came after China’s Ministry of Finance announced on Wednesday that there were no plans to expand a test of property tax this year.

Mainland Chinese stocks rose, with the Shanghai composite up 1.23% while the Shenzhen component gained 1.95%.

Other Asia-Pacific markets also jumped on Thursday. The Nikkei 225 in Japan surged 2.98% while the Topix index climbed 1.98%.

Oil prices were higher in the morning of Asia trading hours, with international benchmark Brent crude futures up 0.81% to $98.81 per barrel. U.S. crude futures climbed 0.94% to $95.93 per barrel.

Officials at the U.S. central bank also signaled an aggressive path ahead, with rate rises coming at the six remaining meetings this year.

“Given our stagflationary baseline which got exacerbated by the Russia/Ukraine war, it appears that the Fed’s focus will weigh more on inflation fighting despite the uncertainty created by the situation in Ukraine based on yesterday’s meeting,” Salman Ahmed, global head of macro and strategic asset allocation at Fidelity International, wrote in a Thursday note.

JPMorgan says these are the stocks to buy on the pullback, including some set to gain 50% or more

S&P 500 chart forms the ominous-sounding ‘death cross.’ What it really means for the market

The U.S. dollar index, which tracks the greenback against a basket of its peers, was at 98.391 after a recent fall from around the 99 level.

The Japanese yen traded at 118.79 per dollar, weaker than levels below 118 seen against the greenback earlier this week. The Australian dollar changed hands at $0.7307, holding on to gains after yesterday’s jump from below $0.72.