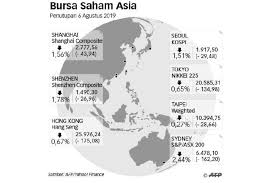 SINGAPORE — Shares in China lagged among Asia-Pacific markets on Tuesday, though some losses were pared following the release of Chinese economic data that was far above expectations.

Hong Kong’s Hang Seng index momentarily fell more than 4% before recovering partially, sitting 2.99% lower by the afternoon. That came after the benchmark index closed at its lowest since March 2016 on Monday.

Chinese tech stocks in Hong Kong erased some losses, with the Hang Seng Tech index briefly crossing into positive territory before losing those gains, slipping 2.36%. The index had earlier tumbled more than 7%.

As investors continued to assess the prospect of potential delistings from U.S. exchanges, dual-listed Chinese tech stocks continued to stay in negative territory: Alibaba was 6.74% lower while JD.com fell 5.17% and NetEase shed 3.38%.

Sentiment on Chinese tech shares had taken a hit on Monday following a report that Tencent could face a record fine for violating anti-money laundering rules.

“Prospects of a hefty record fine on Tencent on money laundering regulatory breaches sent ripples of fears that Beijing’s opaque crackdown on the tech space may not quite all be in the rear-view mirror just yet,” Mizuho Bank’s Vishnu Varathan wrote in a Tuesday note.

In mainland China, the Shanghai composite slipped more than 2% while the Shenzhen component declined 1.318%.

Data released Tuesday showed Chinese industrial output rising 7.5% year-on-year in January and February as compared with a year earlier, higher than the 3.9% increase predicted by analysts in a Reuters poll.

Retail sales in China for the first two months of the year also beat expectations, gaining 6.7% in January and February as compared with expectations for a 3% rise by analysts in a Reuters poll.

However, China is currently facing its worst Covid-19 outbreak since the height of the pandemic in 2020, with major cities including Shenzhen rushing to limit business activity.

“It really is quite a difficult environment. I mean, markets do look incredibly oversold,” Steve Brice, chief investment officer at Standard Chartered Wealth Management, told CNBC’s “Street Signs Asia” on Tuesday. “Maybe when things get less bad markets will rebound quite strongly but it’s difficult to see through that … Often the best time to buy, but it just feels a little bit challenging today.”

Oil prices have seen wild swings since Russia’s invasion of Ukraine, which raised fears of supply disruptions in an already tight market. Talks between Ukrainian and Russian officials are set to restart on Tuesday, following Monday’s negotiations between the two sides.

There’s a 35% chance that the S&P 500 could fall into a bear market, Bank of America says

The U.S. dollar index, which tracks the greenback against a basket of its peers, was at 98.872 — still higher than levels below 98 seen last week.

The Japanese yen traded at 118.32 per dollar after weakening from below 118 against the greenback yesterday. The Australian dollar was at $0.7181 following yesterday’s decline from above $0.728.