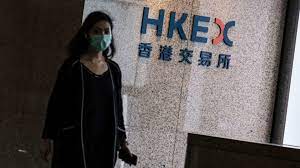 Mainland China’s Shanghai Composite rose 0.3% and the Shenzhen Component was up 0.42%.

Singapore’s retail sales for November is slated for release later in the day.

The Caixin China general services purchasing manager’s index showed easing of pressure on the sector for the month of December, with a reading of 48, maintaining in contraction territory.

The print rose from seeing a six-month low in the previous month with a reading of 46.7.

Hong Kong’s S&P Purchasing Managers’ Index ticked higher to 49.6 in December from 48.7 in November despite remaining in contraction territory for the fourth consecutive month.

S&P said a slower contraction seen in the city’s private sector was due to a pickup in business activity in the final month of 2022, buoyed by easing of Covid restrictions.

Demand in the city still remains subdued, S&P said, adding that overall new orders are shrinking on the back of deteriorating economic conditions.

The Federal Reserve released the minutes from its Dec. 13-14 meeting, which showed central bank officials expect rates to be higher for “some time.”

“Participants generally observed that a restrictive policy stance would need to be maintained until the incoming data provided confidence that inflation was on a sustained downward path to 2 percent, which was likely to take some time,” the meeting summary stated. “In view of the persistent and unacceptably high level of inflation, several participants commented that historical experience cautioned against prematurely loosening monetary policy.”

“A number of participants emphasized that it would be important to clearly communicate that a slowing in the pace of rate increases was not an indication of any weakening of the Committee’s resolve to achieve its price-stability goal or a judgment that inflation was already on a persistent downward path,” the minutes said.

Job openings in November were 10.5 million, according to the latest Job Openings and Labor Turnover Survey, or JOLTS.

The report came in slightly better than expected even though it was little changed from the previous month. Analysts expected JOLTS to be about 10 million in November.

The number of hires and total separations were also little changed at 6.1 million and 5.9 million, respectively. There were also 4.2 million quits and 1.4 million layoffs and discharges during the month.

Chinese ADRs climbed in premarket trading after Ant Group received approval to increase its registered capital, a sign that Chinese regulators may be loosening their grip on the country’s tech sector.

Shares of JD.com and Alibaba each rose more than 6%. NetEase, Baidu and Trip.com were other stocks making notable moves higher.

Ant Group, which previously had its own IPO plans scuttled by regulatory concerns, was allowed to double its registered capital as part of the new plan.