Gold prices eased on Monday as traders awaited December U.S. inflation data that could stress the need for earlier-than-anticipated interest rate hikes by the Federal Reserve.

“People are happy to bid a little bit for gold on the dip. The market is still sort of on the back-foot because of the high yields at the end of last week’s close,” said Nicholas Frappell, a global general manager at ABC Bullion.

Gold is considered a hedge against higher inflation, but the metal is highly sensitive to rising U.S. interest rates, which increase the opportunity cost of holding non-yielding bullion.

“If inflation data is a little bit hotter than expected, this will only confirm people’s expectations (of aggressive tightening from the Fed). You might see a little bit of decline in real yields, and that would be gold positive,” Frappell said.

U.S. inflation data is due later this week, with December core CPI expected to have risen 5.4% annually after climbing 4.9% in the prior month. 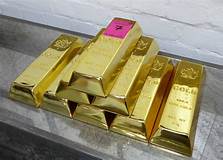