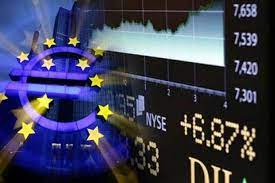 The pan-European Stoxx 600 provisionally ended down 0.5%, with most sectors in negative territory and major bourses pointing in opposite directions.

It comes after inflation in the euro zone hit a new record high in December, raising more questions about the European Central Bank’s policy.

Preliminary data showed Friday that headline inflation came in at 5% for the month, compared to the same month last year. The figure represents the highest ever on record and follows November’s all-time high of 4.9%.

Travel and leisure was the worst-performing sector, down by 1.6%. Basic resources, on the other hand, was the top performer, up almost 1.9%.

Looking at individual stocks, ST Micro was among the best performing, up by 3.7% after reporting higher-than-expected sales in the fourth quarter.

Deutsche Bank was also in the spotlight on Friday after positive statements that the German bank is on track to hit key profit targets, Reuters reported. Shares of the firm rose 1.8%.

Investors are also digesting new jobs data out of the U.S. Nonfarm payrolls grew by 199,000 in December, while the unemployment rate fell to 3.9%, according to Bureau of Labor Statistics data.

The data disappointed after economists had predicted that the U.S. economy would have added 422,000 jobs in December, according to data compiled by Dow Jones. The unemployment rate was expected to come in at 4.1%.

As a result, U.S. stock index futures turned lower on the news.

After a stellar 2021, Goldman says these 6 stocks are set to rise over 40% this year

This comes after minutes from the Fed’s December meeting revealed Thursday a hawkish stance within the central bank. Officials said they are ready to not only increase rates and reduce bond buying, but also to have conversations about lower holdings of Treasurys and mortgage-backed securities.

The news sparked a sell-off in many markets around the world.

Back in Europe, investors are taking in new trade data from Germany.

Germany’s trade surplus dropped to its smallest level in November since 2011, according to Reuters. In addition, industrial production also fell 0.2% month-on-month.

“Supply chain frictions are keeping German industry in a stranglehold. Only exports are sending some glimmers of hope. However without production, the export revival will also be short-lived,” Carsten Brzeski, global head of macro at ING, said in a note.

On the political front, foreign affairs ministers of the North Atlantic Treaty Organization (NATO) are gathering virtually Friday to discuss Russia’s troop build-up near Ukraine. Their meeting precedes high-level talks between Russia, the U.S. and NATO next week.