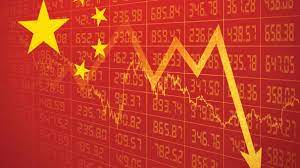 The Shanghai Composite in mainland China pared some losses after the data release but was still down 0.49%, and the Shenzhen Component

The offshore Chinese yuan weakened past 7 against the dollar overnight, and last changed hands at 7.0287.

The onshore yuan also crossed the 7 level in Asia’s morning trade after the People’s Bank of China set the daily midpoint at 6.9305 against the dollar. It was last at 7.0169 per dollar.

MSCI’s broadest index of Asia-Pacific shares outside Japan was 0.75% lower.

“Equities and other risk-sensitive markets [will] struggle as it becomes clear that U.S. inflation pressures are well embedded and that risks to the fed funds rate lie to the upside,” ANZ Research analysts wrote in a Friday note.

— CNBC’s Jesse Pound and Tanaya Macheel contributed to this report.

The onshore Chinese yuan crossed the important level of 7 against the U.S. dollar after the People’s Bank of China set the yuan’s daily midpoint at 6.9305 against the dollar.

That midpoint is the weakest level since August 2020 and weaker than the analyst forecast of 6.9228 per dollar, according to Reuters.

The fixing came after the offshore yuan crossed 7 against the greenback overnight. Both the onshore and offshore yuan continue to trade above 7 per dollar.

Tech stocks suffered yet another sell-off this week as investors digested a hotter-than-expected August inflation report.

Amid a tough year for the sector, some investors are seeking refuge in the relative safety of mega-cap stocks. Top tech investor Paul Meeks weighs in on two such stocks and reveals which he prefers in the current environment.

China’s industrial output is expected to come in at 3.8% for August, according to a Reuters poll. That’s the same pace of growth as July.

Retail sales are predicted to have increased 3.5% last month, compared to the 2.7% reported in July.

The Chinese yuan weakened past 7 against the U.S. dollar for the first time since July 2020 overnight.

In Asia morning trade, the offshore yuan was trading flat at 7.0131 against the greenback.

The onshore yuan has been inching closer to the 7 level, but has not crossed it this year.

CNBC Pro: What’s next for the sinking yen? Here’s what the pros say

The Japanese yen has fallen sharply against the U.S dollar this year and is now hovering near 24-year lows.

Amid reports that that Japan may intervene to prop up the currency, CNBC Pro spoke with foreign exchange analysts for their thoughts on intervention and where they see the dollar-yen heading next.