SINGAPORE — Shares in Asia-Pacific rose in Thursday trade following the U.S. Federal Reserve’s announcement that it will start tapering the pace of its bond purchases later in November.

In mainland China, the Shanghai composite edged 0.22% higher while the Shenzhen component rose 0.62%. Hong Kong’s Hang Seng index was up 0.4%.

Markets in Singapore, Malaysia and India were closed on Thursday for a holiday.

The Fed announced Wednesday it will begin reducing the pace of monthly bond purchases later this month. The move was in line with market expectations following a series of earlier signals from the U.S. central bank that it would begin winding down a program that accelerated in March 2020 as a response to the Covid pandemic.

Oil prices were lower in the morning of Asia trading hours, with international benchmark Brent crude futures falling 1.1% to $81.09 per barrel. US crude futures were down 1.35% at $79.77 per barrel.

The US dollar index, which tracks the greenback against a basket of its peers, was at 93.885 after recently falling from levels above 94.

The Japanese yen traded at 114.14 per dollar, weaker than levels below 113.6 seen against the greenback earlier this week. The Australian dollar changed hands at $0.7461, following its plunge from above $0.752 earlier in the trading week. 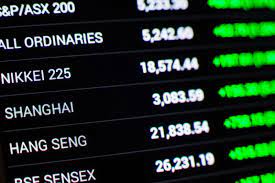