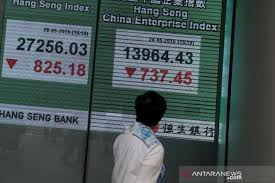 SINGAPORE — Shares in Asia-Pacific were mixed in Thursday morning trade as investors await the release of U.S. consumer inflation data.

Mainland Chinese stocks were lower in morning trade, with the Shanghai composite down 0.19% while the Shenzhen component dipped 0.137%.

Hong Kong’s Hang Seng index, on the other hand, advanced 0.44%. Hong Kong-listed shares of China Evergrande Group soared more than 4% in Thursday morning trade. The embattled developer aims to deliver 600,000 apartments in 2022, but was not looking to a fire sale of its assets to clear its debts, Reuters reported Wednesday.

Looking ahead, the Reserve Bank of India is set to announce its interest rate decision at 12:30 p.m. HK/SIN on Thursday.

Ahead of that announcement, the Indian rupee was at 74.778 per dollar, stronger than levels close to 75 seen against the greenback earlier this month.

The U.S. dollar index, which tracks the greenback against a basket of its peers, was at 95.586.

The Japanese yen traded at 115.50 per dollar, still weaker than levels below 115 seen against the greenback earlier this week. The Australian dollar was at $0.7168, largely holding on to gains after its climb from below $0.712 earlier in the week.