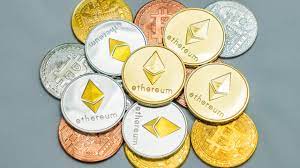 Over the past few years at the World Economic Forum in Davos, Switzerland, the number of cryptocurrency industry attendees has boomed.

But after a near $1.4 trillion wipeout in 2022, the crypto industry is being a bit more reserved with how it splashes the cash and several companies spotted last year are not in attendance. 2022 was marked by failed crypto projects, liquidity issues and bankruptcies, topped off by the collapse of major exchange FTX.

When the World Economic Forum was held last May, bitcoin was hovering around $30,000, after having already fallen more than 50% from its all-time high hit in November 2021. More pain followed with bitcoin dipping as low as $15,480.

The Promenade is the main street in Davos where companies and governments take over shops and cafes for the week. Last year, crypto firms from all walks of life took over the place. But since the market slide, there are far fewer crypto firms with flashy store fronts at Davos.

One shop selling non-fungible tokens, or NFTs, has disappeared. Prices of NFTs, which are digital collectibles, also plunged last year. What’s left are companies that survived the bear market and that are looking to expand their businesses.

“It’s very clear that the speculation period is drawing to a close and every company that you see featured … is really focused on real-world use cases,” said Teana Baker-Taylor, vice-president of policy and regulatory strategy at Circle, the company behind the USDC stablecoin.

A stablecoin is a type of digital currency that is supposed to be pegged one-to-one with a fiat currency. USDC is pegged to the U.S. dollar. Circle says it is backed with real-world assets such as U.S. Treasurys so that one USDC can be redeemed for $1.

Casper Labs, a company that has built a blockchain designed to be used by businesses, is running a space on the Promenade called the Blockchain Lab. Casper Labs was also present last year in Davos.

“So we’re over a year into the bear market, so I think the shock of that is settled in and for those of us that have been in the space for years … we feel like this is the time to build,” Sarkin told CNBC.

He added that the crypto firms that have remained at Davos are “substantiative projects” and “the real deals” versus things like NFTs.

There were also those in traditional finance who welcomed fewer crypto firms.

Mark Haefele, chief investment officer at UBS Global Wealth Management, was asked during an event hosted by the Swiss bank what he would like to see in Davos this year. He said he had seen it already: “It’s less crypto on the main street.”

The mysterious case of the orange bitcoin car

On Monday, a flashy bright orange Mercedes-Benz car was parked outside of the Blockchain Hub on the Promenade.

A coin that represented a bitcoin was placed where the Mercedes-Benz logo would usually be. On the tires and the licenses plate, the words “in crypto we trust” were printed. The license plate had the Ukrainian flag on it and the name Kuna, which is the company behind a cryptocurrency exchange of the same name.

Kuna also set up the “reserve fund of Ukraine” after the war with Russia began where people could donate crypto to Ukraine.

People in the vicinity that CNBC spoke to could not verify who parked the car there.

However, two crypto executives who spoke to CNBC did not welcome the orange car, particularly after the market crash and the excesses of the industry were exposed. One remarked that the presence of such a car was not helpful for the industry’s reputation which took a hit last year.

CNBC reached out to Semen Kaploushenko, CEO of the Kuna exchange, via LinkedIn, but is yet to receive a response.

CNBC also reached out to the Blockchain Association of Ukraine which Kuna founder Michael Chobanian is the president of, but is yet to receive a response.